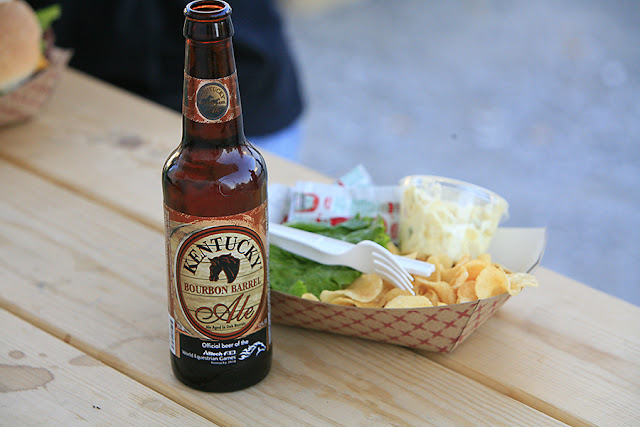 (My husband's favorite beer -- the Kentucky Bourbon Barrel brand -- makes it's own headlines.  Dave thinks this is the greatest thing since the invention of the beer brewing.  In his estimation, what's not to like? Bourbon?  Beer?  Kentucky? Nope, all three rise to the top of he personal barrel - the thing that sits on top of his neck, between his ears.  Dave's obsession with this beer was created by none other than the owner of Alltech, Dr. Pierce Lyons.  During our first tour of the Alltech Nicholasville facilities, Dr. Lyons poured us a beer in his personal Alltech Irish Pub.  Dave was duly impressed by the flavor and substance of the Kentucky Bourbon Barrel Ale.  Later at an Alltech Press Dinner, my resident beer junkie was fortuitously seated next the the Alltech Master Brewer.


They talked beer, specifically the Bourbon Barrel Ale. My husband was treated to a personal guided tour of the brewing facilities [a tall KBBA in hand] by the brew master and has never been the same.  When you say Bourbon Barrel Ale to Dave, his eyes glaze over and a small smile emerges on his face. Most likely he is mentally drifting back to that lovely April evening when his obsession (or addiction) was born as he mentally checks his personal inventory in the beer fridge.

One of the most hospitable places  of the World Equestrian Games was the tent Alltech set up for we press types to use as a chill out zone [I think they actually called it that -- The Chill Out Zone].  The Alltech Chill Out Zone had one great thing going for it, [in Dave's estimation at least] that made it the absolute pinnacle of  WEG experiences -- the Kentucky Ale beer tap and those little plastic glasses in which to pour a bunch.  Kentucky Ale produced a WEG experience for Dave that was so much more enjoyable -- on a personal level. For him, watching horses' work at their given occupation and a beer are a natural affinity -- especially when the beer is free.  While the jury  is still out for me about my WEG favorite [not really, I loved it all] , Dave's pretty adamant in his opinion.  The beer wins hands down...)

Following a launch event Sunday evening with the Beijing Horse Association, Alltech received its first Chinese order for 40 cases of Kentucky Bourbon Barrel Ale. The order, placed by Qingdao Bao Hu Village Horse Club, will be used primarily as VIP gifts in celebration of the Chinese New Year. With more than 200 members, it is the largest horse club in the Shandong province despite being only two years old. 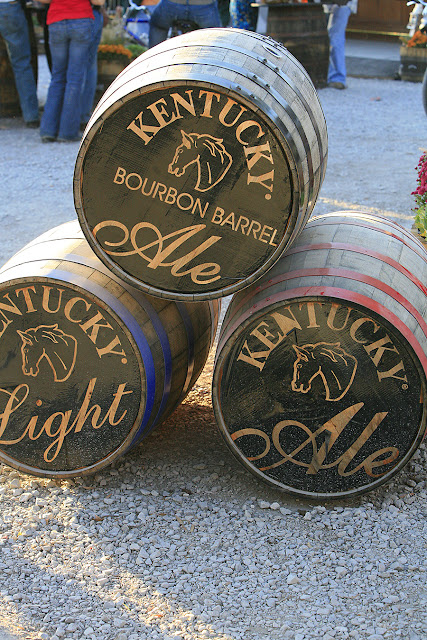 Commenting on Kentucky Bourbon Barrel Ale, Mr. Yu Rui Zong, president of Qingdao Bao Hu Village Horse Club said, “The taste is so good and unique. It is a real beer for the horse person.”

The Chinese equine industry is growing rapidly with more than 400 horse clubs currently registered in the country. Building on its global recognition as the title sponsor of the Alltech FEI World Equestrian Games, Alltech chose to introduce its Kentucky Bourbon Barrel Ale first to China’s equestrian community.

“In terms of total national beer consumption, China ranks highest in the world, and the Chinese people have traditionally had a unique relationship with the horse,” said Roland Matyasi, East Asia marketing manager for Alltech. “It is natural then for Alltech to introduce itself to the Chinese equine community through this distinctive Kentucky brew, which we hope to make available in all major Chinese riding clubs. Once the Official Beer of the Alltech FEI World Equestrian Games, we now want to see Kentucky Bourbon Barrel Ale as the beer of the Chinese horse community.”

“Kentucky Bourbon Barrel Ale is a great beer, perfect to the Chinese taste,” said Mr. Yao Ge, vice-chairman of Beijing Turf & Equestrian Association. “With over 5,000 racing horses just in the Beijing area, the market will be very exciting for LIFEFORCE as well. I am sure that Alltech will be successful in China.”

With LIFEFORCE, its all natural daily equine supplement currently being registered in China, Alltech is hopeful that Kentucky Bourbon Barrel Ale will pave the way for additional products to be introduced to the Chinese equine community.

“I am absolutely confident that China will welcome Alltech’s more than 30 years of experience in equine health and nutrition, which ensure the highest quality natural products with full traceability,” said Matyasi.

LIFEFORCE is expected to become available to the Chinese market this year.

Frank is one of the original Horse Whisperers.    His work with mustangs is simply amazing. Every year in Arizona, Frank holds a grand week long Gentle Solutions clinic. It's a great opportunity to work up close and personal with this amazing teacher!

YOU WILL  DISCOVER THE HORSE YOU NEVER KNEW!
FRANK BELL has taken the mystery out of Natural Horsemanship. What others have made complicated and expensive, Frank has simplified and made affordable. His logical sequence of exercises quickly empowers the handler. From there, the accomplishments are endless as every single avenue of horsemanship is suddenly open to explore confidently.

Hands down, FRANK BELL has created the most straightforward set of exercises that immediately places a solid foundation under every horse and rider. Heightened safety equals heightened confidence for you and your horse. . . You wouldn't want to fly with a pilot who didn't do a check-list, why wouldn't you want a checklist for your horse?

For more information visit Frank's website or watch the video clip below.