Jane Savoie and the Fear of Wild Turkeys 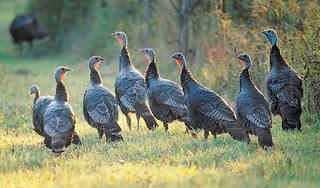 One bright fall misty morning, Ping and I went out for a hack.  While riding through some woods we popped over the crest of a hill.  Suddenly,  huge flapping brown blobs seemed to fly out of the trees from all directions like Dorothy's flying monkeys in the Wizard of Oz! It seemed a flock of melegris gallopavo (aka wild turkeys) were roosting up there -- taking both the old redhead and myself completely by surprise. I, having absolutely no presence of mind, stopped breathing.  But the old Pingster just hunkered down for a moment before calmly walking on.

After the feathers stopped flying and the dust settled, I started to inhale again. I am loath to admit it but I was little embarrassed.  My horse had had more presence of mind than I in this avian emergency. His walnut-sized brain worked better on the fly than that of the supposedly cerebrally-endowed interloper perched on his back-- the purported captain of the ship, master of our collective fate.

Unlike Ping (at least in this particular situation) fear is one of those terrible monsters that tends to shut me down.  My little brain seems to stop dead in the water -- so much so that I forget to breathe, let alone think -- a bit of a Bambi in the headlights. Dressage instructor and educator Jane Savoie has just released this video clip that speaks directly to this issue.  It's part of her new Freedom From Fear project.

Having been privileged to be a member of Jane's audience on numerous occasions, I have always taken away many useful ideas. She seems to have a knack for not only putting her finger right on an issue but then offers a great method for mastering it. She's an excellent communicator and educator. So when I received this clip it was yet another Ah ha, now I get it... Jane Savoie moment for me!

I know from discussions with my friends that I'm not the only person out there sometimes immersed in a quagmire of fear -- both of the known and the unknown. Take a look and see how, once again, Jane Savoie has managed to take one of the turkeys with which we all struggle and, simply and succinctly, tell us how to put it to roost.